We propose consolidating the CityDAO Land Marketplace and Baby Parcel concepts under a new entity, Hashland, with the mission to bring the world’s land on chain. We see a future where blockchain replaces county land registries, and transactions take three seconds instead of three weeks. By representing land as NFTs, land becomes a programmable primitive, making it easy to implement mechanisms like Harberger taxes and collective financing on top. Plus, the land will be interoperable with DeFi for lending and financing. 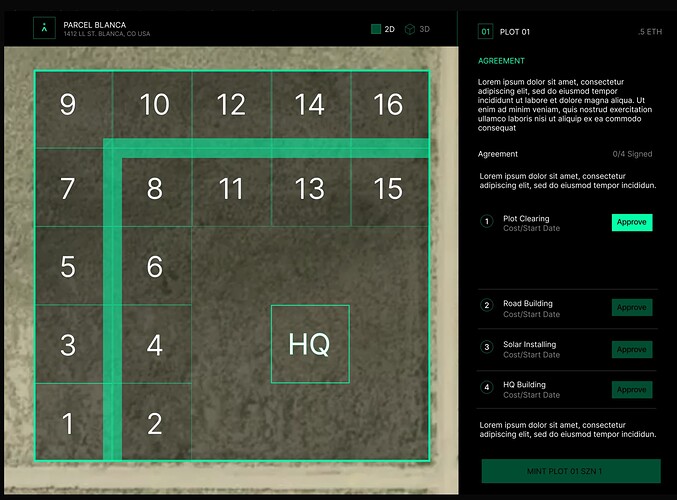 We propose starting small, with the NFT Lease primitive that will allow us to build a network of leasable land on-chain today. By starting with NFT leases instead of true ownership, we can bypass convincing county registries to switch to blockchain (though that’s something we’d love to try in the future).

We will start by offering NFT land ownership to Citizens using the Baby Parcel in Blanca, Colorado. If there is excess demand, we will buy more parcels for Citizens, prioritizing buying them close together to create a neighborhood. We will accept requests from Citizens to buy land in any US state. Then, we will be a platform on which DAOs and crypto-native organizations can lease and eventually buy NFT based land.

To enable agility and efficiency, a separate Hashland entity will be formed and the project will be run as a centralized entity with Scott serving as CEO and exercising management responsibilities and setting the cap table, team & salaries, incentives, etc.

The team requests $135k in immediate funding for development costs, fronting land acquisition costs if needed, and compensation, and other expenses. Upon meeting the Success Criteria below, an additional $65k may be unlocked. If this CIP passes, in exchange for the $135k contribution, Hashland will remit 10% of its net revenue to CityDAO, up to $10m.

The Hashland team will start by executing on Baby Parcel - it will be the first “customer” of the Hashland marketplace. The Baby Parcel properties will be owned by CityDAO but made available to lease on Hashland. CityDAO will receive revenues from the Baby Parcel leases and can ideally continue adding property to the marketplace.

Hashland Inc will keep a 1% transaction fee on land purchase or sale transactions (via NFT royalties). If this CIP passes, in exchange for the $135k contribution, Hashland will remit 10% of its net revenue to CityDAO, up to $10m.

For example: Vitalik buys $10,000 worth of land. The seller of that land (could be CityDAO, Hashland, or a private individual who listed land on Hashland) who listed the parcel parcel on the network keeps $9,900. $100 of that purchase (1%) goes to Hashland treasury. If the CIP passes, 10% of that revenue, $10, goes to CityDAO.

In exchange for the $135k, 10% of net revenue from Hashland transaction fees will be remitted to CityDAO, up to $10m.

If all the success criteria are met, the Hashland team receives an additional $65k for continued development of the project.

We will use the CityDAO Parcel 0 Viewer as a starting point, and add the ability to select lease length and enforce that transfers are within a whitelist. See the technical implementation doc for details.

Having worked with Josh on CIP-100 and knowing that Scott is splitting his focus between AirGarage and this, I do not believe the team can pull this off (and would wager money against it).

I trust the team and like the idea. I think the success criteria are meaningful and well planned, and the roadmap is clear. I have a few questions, though:

Thanks for the questions @Da3vid.

1. Would there be a new LLC created that is owned by CityDAO, or would it be owned personally by the team or members of the team?

A new LLC or C Corp will be created that is separate from CityDAO. The goal is to let it operate independently and give the team economic incentive to work hard and build out the protocol. This way, it will be able to make decisions faster, and if it succeeds, it will pay CityDAO the royalty.

2. CityDAO receives 10% of net revenue, not profits. Where does the other 90% of the revenue go? Is it used completely at the discretion of the team / CEO?
Yes, it will be re-invetested to Hashland project, with the goal of growing it / acquiring more land / getting more land for Citizens and other DAOs.

3. Is the initial $135K all discretionary? Is there a cap on how much of that can go to the team compared to development costs for the project or land acquisitions?
I wanted it to be just allocated with good judgement, but I can commit that no more than $35k will be used for compensating team members.

4. Is there any oversight mechanism by CityDAO, or is this money seed funding for a project to be entirely owned and indepedently operated by this team, but that will return 10% of net revenue to CityDAO?
This will be independently operated and run. The goal of doing it this way is because i believe it’s genuinely best for the DAO to fund little startups with their own teams who are economically incentivized.

Sounds good to me. I think this could be an exciting and innovate use of tech and could help people to have access to otherwise unaffordable land. Also, I appreciate that citizens will get some early access benefits and potential airdrops.

Interesting, for sure. An excellent experiment for CityDAO. While putting land on-chain via parcel 0 was a great proof of concept, at the moment, the land isn’t usable, and thus, the on-chain aspects (ability to ultimately lower transaction costs) can’t really be explored. Ideally, this can solve that.

A couple of questions.

My feedback is that this should either have an uncapped financial benefit for CityDAO, or CityDAO should have a significant stake in the organization (though governance should be independent).