The conversation is continuing with CIP-47!

Recently there have been a few proposals floating around related to Parcel 0. Most of them involve a minting w/additional costs. This proposal is to distribute Parcel 0 directly to citizens.

This proposal is to make Parcel 0 NFT’s available to EVERY citizen without any additional costs. Update: Good news! We’ve reached agreement on the pricing; mint price will be free/gas-only - that means the next question is around whether or not Parcel 0 will be available to all citizens.

The conversation has evolved since this CIP started, so the proposal will be broken down into multiple phases.

If citizens vote to limit the number of NFT’s, efforts around the existing proposal to raffle 1k NFT’s will continue. Additional questions related to CIP-47 will not be asked.

Thanks for putting this together! I do want Parcel 0 to be co-owned by the entire DAO so I don’t love the idea of just “selling it” to a smaller group of Citizens.

But there are a couple benefits:

A plot size of 50 sqft may be small for someone who wants to build a home, but I don’t think that is a problem for symbolic ownership.

If it was big enough for me to stand on and say “my nft represents this plot” then I’d be good. Honestly, something like 7x7 feet seems like a great size for one citizen.

Changing 1k to 10k (or whatever number of citizenships stake a claim) is work, and we should compensate the Dev’s for whatever that cost is. I don’t think the sunk cost is worthless and was certainly valuable. That said, I can’t imagine any additional costs would be prohibitive.

Plenty of 10k projects that are considered scarce, and the fact that this is literally the first on-chain land has it’s own value. I already hold a citizenship, I don’t want my citizenship to be meh and some future thing to be considered scarce or more valuable. Why not expand the benefits of a citizenship? I know it’s not intentional, but it feels like bait and switch.

I see a ton of other projects generously dropping tokens/etc. to ALL contributors (BAYC $APE, ENS $ENS, heck even $SOS tokens were given to all participants of a separate platform). What is the purpose or value of being stingy with the asset that defines us?

Frankly, I can’t understand why we need to create additional scarcity or why we would want to leave any of our early citizens out. We have the land, accommodating this won’t be more than a blip on the radar of our treasury, and this is what we purportedly set out to accomplish… what is the motivation to create additional exclusivity?

Buy Parcel 1 and make it scarce, but give Parcel 0 to the people who made it possible.

I am all for this. I think 1000 made total sense from a development perspective, but if there is no real plan to develop, then 10 000 is fine. If anything is done with this it will be something like a Totem, which could be done on a few plots, or some larger scale thing like wind or solar, which could be done easily enough as well. It could be carried out as a collective effort without needing to coalesce plots per se. So I think it makes a lot of sense to do this. Got my vote. Thanks DenverCitizen.

ps. what do you mean by staking a claim exactly?

Also, for the 3rd option, boring question but does this require everyone to be on at the same time? How would the timing work?

If anything is done with this it will be something like a Totem, which could be done on a few plots, or…

Beyond the spots available for plots, we also have common/community land which could be a good place for such a thing

…could be carried out as a collective effort without needing to coalesce plots per se.

Yes, it is interesting actually. City building really requires private property for a good portion of the plots. But anything with Parcel 0 would be done collectively. Thus, it will be a very unique interesting experiment when it gets rolling!

ps. what do you mean by staking a claim exactly?

Also, for the 3rd option, boring question but does this require everyone to be on at the same time? How would the timing work?

Stake a claim = citizens who are actively participating in the community would be notified that there is an option for them to participate. Participation could be as simple as saying “I want in” … maybe something like voting “YES” for a new snapshot which says “Do you want a plot from Parcel 0?” - this would be like a homesteading for however many people opt-in instead of an airdrop to everyone. This would be Option 2

The latter is more complex as it involves people actively selecting which specific location they are interested in. A further option for additional complexity is an algorithmically determined plot, but it could be simple with 10k pre-determined plots. In either case, citizens would submit their desired X,Y coordinates. These coordinates could be kept hidden until after the mint, or you could see which plots people selected before you chose your location. This would be Option 3

Personally, I think the most exciting aspect would be Option 3, with the X,Y selections staying hidden until all citizens had a chance to select their desired location, which something like a Voronoi Growth Euclidean as a reveal to see who gets which plot and how big it is. There would need to be some minimum plot size (one meter square?) and a mechanism for placing those plots next to each other if/when two citizens select the same X,Y location.

Cool. So option 3 doesn’t require live participation. Like you just need to go in some time window? And people can select the same x,y, but it would just choose some x,y, not per se the one is chosen.

Option 2 seems the simplest and fairest. You would hate to allocate plots to people who have totally disappeared or don’t remotely care. If someone in theory wouldn’t have even bothered to buy one of the 1 000 if auctioned, then, shouldn’t be included. As in, no reason to include people with zero interest in parcel 0. If that makes sense. note option 3 would be just as fair, just not as simple, as it would also require active participation.

Cool. So option 3 doesn’t require live participation. Like you just need to go in some time window?

Yes, leave the process open for a week/month/whatever so those that have an interest can get in while the window is open, even if they aren’t constantly involved in the forums.

Both options are “opt-in” as a reward for participation. I wouldn’t want to non-participants out entirely though, so perhaps we allocate some tiny portion of itty bitty parcels (a pixel worth?) to everyone who didn’t get in on one of the ‘good’ plots.

people can select the same x,y, but it would just choose some x,y, not per se the one is chosen.

Here’s an example from the referenced euclidean. Say you and me both selected the red dot as our desired location. We would be moved to the black dots and would end up with one of the blue/green plots. 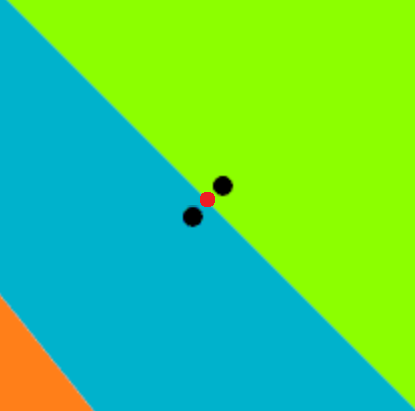 Thanks for the clarification. Makes sense to me. I am all for that. It requires some active involvement, and it will be exciting.

Thanks for the confidence. I updated the proposal to say let’s just do this through those 3 choices, and people and vote for whichever one they think is best.

I proposed the IRV method since it’s a proven way of selecting a single option from multiple choices.

Simple is the best; especially for DAOs.
Airdrop 10K plots.

Second this underrated comment. I think we were creating unnecessary steps with the announcement since Dec/Jan. Just airdrop 10k plots or enable the original citizenship NFT to do exactly what you want to plan with plots. Let’s focus on execution and legal structure. Why bother with complicated stuff like doing rounds of raffle, minting, setting 1000 plots, etc…

I think it would be great to get this plot done and over with, have it just be a symbolic thing and move on to the other awesome parcels we have lined up.

Personally, I prefer CHOICE 3. Although it is a little bit more complicated, it is very interesting and can improve citizens’ right to choose.

However, I think it’s too late to propose changes to the way Parcel 0 is rolled out. In addition, it will make citizens feel that the core team has been changing what has been announced, causing a crisis of confidence.

I like the overarching principle of air dropping the parcel 0 plots for free, and I think the three options are all good - will be interesting to see what the citizens want - just a simple proof of concept (option 1) or try an experiment in maximizing preferences (option 3). Personally, while option 3 would be interesting, it feels like a lot of extra effort that doesn’t contribute to the core values of CityDAO… at this stage. I can see a future where other parcels will want to experiment with something like this. but for the first one lets just keep it simple. I’m leaning towards options 1 or 2.

Question about how this would work once voted on. I kind of view CIPs as legislation, and then the question is who (literally which citizen) would implement since we don’t have an executive branch to execute on the legislation… If option 3 were chosen, it is saying that the citizens authorize CityDAO to build a distribution mechanism with some broad principles but no specifics. Whoever develops it will have to make some choices about how the mechanism will work. Is there oversight? Another vote on those decisions? Or responsibility transferred to the developers guild? I’m new to DAOs, so would love to hear how this is supposed to play out.

Also, all of these choices may require bounties as you say. Should you include authorization for something like “up to 10 citizen NFTs as bounty?” Or would bounties be handled in another CIP after this one passes?