Thank you for this proposal @DenverCitizen9. As for the First Question I am in favor of 1 plot per citizenship. What’s inevitably going to happen if we choose every wallet is people are going to distribute citizenships to a bunch of wallets to claim more plots. This is a big burden on the individual citizens who will feel they need to do this to keep up with the pack, as the opportunity cost of not doing it could be quite high. I’d bet we’re going to be dealing with a lot of support requests for lost citizenships and such. As to the Second Question I believe a simple claim/mint system, where each mint is random, is the best choice. We want something simple to get through this in a reasonable amount of time. Choice 3 is too complex and Parcel 0 will never end. I like Choice 2 over Choice 1 because it rewards active members. Anyone who can’t sign onto a site to mint their plot(s) doesn’t deserve one. The remaining plots can be distributed pro-rata to citizenship holders or reserved as community land.

Choice 3 is too complex and Parcel 0 will never end.

You say this like it would be a bad thing

We’re racing to drop Parcel 0 as if the end is the goal. Say the drop happens, then what? We each hold one more NFT… why is that important?

We know it is going to be a long time before we purchase another piece of land, if at all (citizens have indicated an interest in building a city, not buying land). Option 3 represents a fair way for citizens to “claim” a parcel. How would this happen if this were the real world, with real land?

I don’t see option 3 as a delay, or as busywork, I see it as something novel and exciting which we can all rally behind and engage with. It would be a good use of our time to figure out such a thing.

FIRST VOTE: How many Plots per Wallet?

If quorum is not reached, those working on the Parcel 0 team will make this determination at their discretion.

Now that we’ve agreed to change Parcel 0 that was originally approved, we should make this change as good as we can, and I vote the Choice 3

I agree, and the important bit was all citizens not necessarily these details. Removed.

I love using IRV for this. We should do that for every vote that has multiple options.

Except votes where we are trying to select multiple options

Thanks for getting this proposal up so quickly, and I’m glad to see we will be making progress on parcel 0. I have to say I’m torn. I agree with @gugz that I kind of just want to be done with Parcel 0 - especially since there isn’t much we are planning to do with the land (I know I know, there might be future possibilities, but we certainly aren’t building a city there.).

But @DenverCitizen9 makes a good point. We hand out the Parcel 0 NFTs and then what? It might be nice to also have this other proof of concept (choice 3) to point to for whenever we get around to Parcel 1.

But @DenverCitizen9 makes a good point. We hand out the Parcel 0 NFTs and then what?

I had a great conversation with @slyRacoon23 today. With Option 3 for Parcel 0, the “then what?” can actually be pretty huge if we don’t pull the trigger prematurely.

We covered a lot of ground in one short brainstorming discussion, where we talked about creating an AR experience on the actual land (parcel owners could display what they wanted).

If we were to do something like that, we might even want a city planning type person to help us determine the layout. Would we want actual pathways on the land for people to walk? If so, that would mean streets in the metaverse that we wouldn’t want going through people’s properties (this would need to happen first!).

Also, what about interopability and the ability to use the plot in other novel ways. What about legal or commercial rights in the metaverse? Have lawyers figured out how to define virtual property?

There is so much more that we could do, and the rabbit hole goes as deep as we’re willing to follow it.

I had a great conversation with @DenverCitizen9 as well. The idea is quite big. It’s about Life-sized augmented reality. The idea is to tie the physical land with the meta-verse land and have it be an AR experience while having very secure property right, e.g. Data Vizualiztion on the land, who can view the land, who can build on the land, etc. Life-size Augmented reality is quite new tech at the moment which its only use case is construction development but it’s a way to bridge the physical with the virtual. Here a link to show what I mean (link).

It is a huge undertaking that will take quite some time however the virtual can be built fairly independently of the AR which will give people to develop and create the VR aspect.

I love this! Definitely a substantial undertaking, but I’ll bet we’ve got all the necessary skill-sets in this DAO to firm a project around it. I’m excited about the utility this would add to the Parcel 0 NFT, and I’m a big fan of the AR component that could tie it to the actual land.

What’s missing from these conversations is that a Parcel 0 NFT should/will convey real rights related to the parcel. I can’t name another project that grants liquid control rights to a piece of land. I think that’s a cool proof of concept and I think that’s what people are missing in the big picture here.

Can we leave flexibility in the initial drop so that the fate of everything else is in Parcel 0 Holders hands. I think @DenverCitizen9 alluded to this elsewhere. 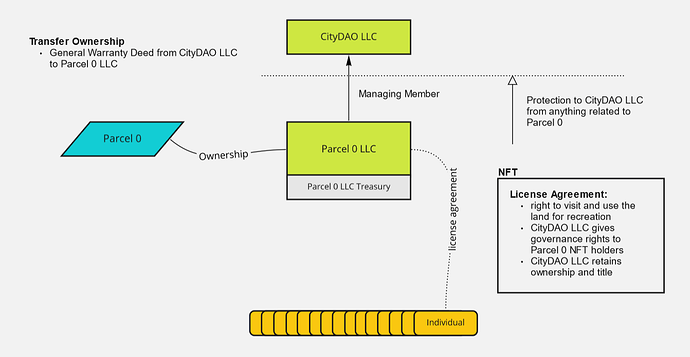 Yes, part of my concern is the current ambiguity. These things have been discussed, but not defined.

I think we need to push things back, and open up the conversations to figure out what’s possible with the plot/distribution mechanism and and finalize all of these things. This is why I am ultimately pro option 3.

The only thing I can think of is this: we know for sure they’re will be future parcels. And in those future parcels we are pretty sure that we’ll need separate parcel NFTs. So we might as well establish that structure now for parcel 0 as a proof of concept.

What you are looking at:

2) People pick plots by clicking specific locations (9 plots in this example). Option to see other locations as they are selected, or keep it all hidden for a final reveal. Could even allow users to edit their selected location for some amount of time (say, you don’t like your neighbor, or want to follow the crowd, or move to a less-dense area)

3) The clicked points grow to consume whatever territory is available. If the selected points are clustered around denser areas, then that will mean urban/smaller plots. For less dense areas, it will be rural/larger plots 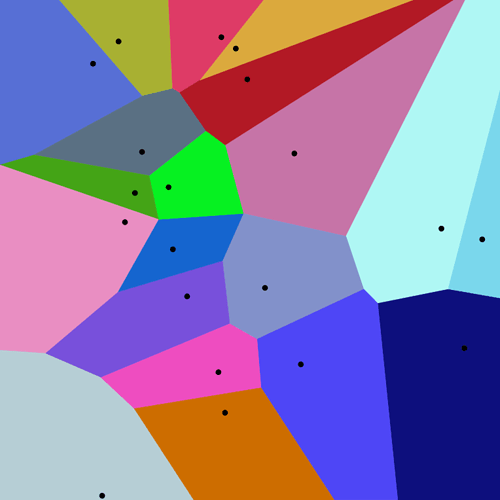 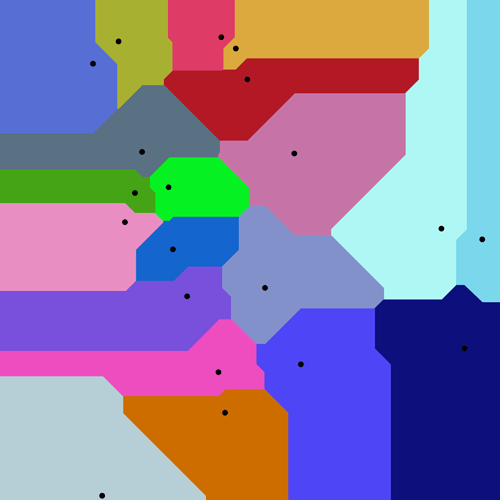 @DenverCitizen9 are we ready to put this to a vote?

I’m not sure. There was talk of having it happen simultaneously to expedite since CIP-43 wasn’t complete, but the original plan was to wait for CIP-43.

I’m OK either way, happy to defer to the core team for timing.

Updated to reflect decision to airdrop.

Exploitable: Split up your Citizen NFTs into many fractions each sent to different Ethereum accounts. Could be done with a bot.

Exploitable: Send your Citizen NFTs to different Ethereum accounts so you still get 1 Parcel 0 NFT per Citizen NFT. Could be done with a bot.