This is a proposal to reimburse Guild Facilitators who went to Wyoming to work on CityDAO for one week, to visit possible parcels of land that CityDAO could purchase for building a city (Parcel 1) and to plant a flag on Parcel 0. This proposal was previously put on Snapshot, but was removed before a vote could be taken, due to procedural issues. If you agree that this should go to a Snapshot vote, please like this post.

CityDAO began with a tweet from Scott Fitsimones on August 5th, 2021. In December 2021, the CityDAO City Council was formed through elections. They began work on a charter. The months from January to April were an exciting time, with numerous hours of city council meetings daily, and the eventual creation of the Charter, the Operating Agreement, and the Bundled Guild Proposal, all of which passed via a Snapshot vote. At no time had these council members, many of whom are now facilitators, met in person.

On April 26, 2022, Scott told the facilitators that he was going to Wyoming to visit Parcel 0 and to plant a flag. He invited them to join. It was a last minute decision but some members bought a ticket. The members who chose to attend were: David from the Legal and Education Guilds, Sytonikka (Nico) from the Design Guild, Pat from Events and Lyons from Operations. We met Josh (formerly DAOvolution) who lives in Wyoming, along with Wdclapp (Walt) from the Legal Guild and his brother kkopczyn (Konrad) from the Real Estate Guild, who were there.

Relationships: This trip proved to be extremely valuable. In terms of spending time together, everyday we ate breakfast, lunch and dinner together. When we weren’t seeing land or visiting Parcel 0, our days were spent sitting around a table at the Airbnb with our computers open, on calls with others in the DAO, discussing the mission, the vision, the values, and the future of CityDAO. When we had questions, we could just ask each other. The days were filled with very fruitful conversations about issues that could be discussed in person rather than over Discord.

Real Estate: We were able to engage with local real estate agents in Wyoming and actually visit a number of properties for sale, including both unused land and land with structures, to get a better idea of prices, concerns of the local residents, availability of parcels and contacts that we could use in the future for seeing available land and making offers.

Legal: We were able to meet in person with the local Wyoming representative of CityDAO who will handle legal filings, and who created the Parcel 0 LLC. Meeting with him in person allowed us to make an invaluable contact, another law firm that specializes in securities and who literally helped write the Wyoming DAO law. They are now serving as outside counsel for CityDAO and it is unlikely we ever would have met them had we not been there in person.

Parcel 0: We went to parcel 0 and planted a huge flag together. We were able to gauge the land, the driving, the conditions and to discuss more meaningfully how this land may be used viably. In addition, we were able to have a long conversation with the neighbors who live next to Parcel 0. They were extremely interested in who we are and what we represent. Despite living in a non-urban setting, they were very knowledgeable about both CityDAO and blockchain. This gave us valuable insights into the neighbors we may have if we decide to move forwards with a Parcel 1 purchase in Wyoming or similar areas. 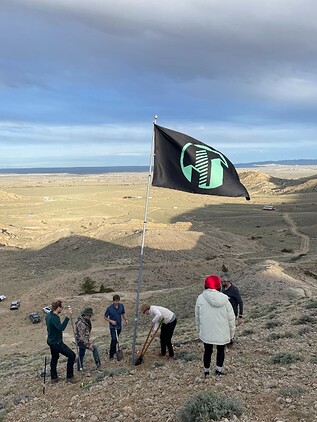 The value of this IRL meeting of the facilitators was high. It demonstrated that IRL meetings are an important part of CityDAO. Real connections were made with each other, with the guilds and with the land. We believe that IRL meetings between citizens, facilitators and guilds should be a part of our goal. We would therefore like to establish a precedent that they be funded so that others, not only facilitators, but also citizens, may meet outside Discord and in real life.

For all airplane tickets, food, car rentals and expenses, the total cost for this trip was: $9005.27

The expense breakdown can be seen in this document: WY trip expenses - Google Sheets

support as I was part of the trip

But it felt like a very effective use of our time, we visited other places that can be potential parcels in Wyoming, discussed many effective next steps and felt a lot more mission aligned!

I mean i’m not against the whole zoom meetings and all but IRL will be always a part of our lives (majority). Good relationship & ideas wont come up with zoom meetings but it will with contact. Trying to create a strategy from where you sit is not an easy task. So i say, we always have to visit the field and feel it.

ps : i wish someone other than US could join tho

Looking forward to more events like this, I think it was extremely beneficial.

This seemed fun and productive. Can’t wait for the Citizen meetups.

I can’t vote “yes” on this proposal because I’m on the same line as @Fugyeah , both the process and the goal were not clear.

Agreed although I would otherwise be inclined to vote yes.

Unrelated: what’s up David’s 4G hotspot? Is that now owned by the DAO?

I never bought a 4G hotspot. Lyons did. I don’t know what he did with it.

It’s attributed to you in the spreadsheet; can you go through and ensure that it is correct? I’m under the impression (from what I heard about a BMW i8 rental fiasco in Miami) that Lyons has a propensity to spend and then bill the DAO for it, so although this seems like a mistake, I would like to be sure.

A few thoughts on this one:

We should be following proper voting procedures
@Da3vid - is this an operations guild thing? This seems like an honest mistake, but we definitely need to have a tighter system in place - once a vote is approved there should be a pretty immediate switch to whatever the vote said. And if there needs to be development or time spent to do the transition then that should be mentioned up front. This happens a lot in the regulatory world. We say “ok the regulations are officially published, but there will be a grace period until A date. And after that only X, Y Z exceptions” It all has to be clearly spelled out at the start otherwise people freak out.

I support using funding for IRL events, even events that are primarily just for “leadership”, but we need more transparency
This came up on an education guild call last week, the idea that some citizens are feeling a little disconnected from what is happening when leadership meets. Now I know we are trying to be decentralized and that there is no “official” leaders, but there is pretty clearly a leadership group. I’m actually fine with this, I think it helps us move faster, but the trade off has to be more transparency about what happens in these meet ups. I appreciate the google spreadsheet of expenses. That’s good. But what did you talk about / decide on as directions for CityDAO? Maybe I missed where that was posted, but if you are going to ask for treasury funds, then I’m thinking it would be good to see a couple page summary of what happened. I’m not talkign about a transcript, but a general summary.

I worry about precedent here
This seemed like a useful meeting, and in a vacuum, I would vote to approve these funds. But what if I want to meet up with another random citizen and talk about CityDAO all day at an AirBNB? Can I make a CIP to get reimbursed for that? Where do we draw the line? Is this only eligible for reimbursment if guild facilitators meet? Does there have to be a certain number of citizens in attendance to count? Should this be pre-approved with a CIP vote, so that way if citizens want to pay for me and a friend to chat we leave it up to them? Lots of questions I know, but we just have to be careful.

In summary, I’m really glad David put up this proposal, because it offers a lot of things that we need to think through. I’m ok with voting to approve this one, but I’d want some procedures in place before we do anymore. I know its a little late but maybe we could modify the CIP to vote to approve AND draw up procedures for the next ones?

I’m not sure I understand how an after-the-fact reimbursement request is appropriate; it certainly wouldn’t be in any other organizational context with which I am familiar.

Particularly for an event that I, for one, only became aware of after it was concluded.

I believe the appropriate approach in the future would be for the community to pre-approve a budget request for this kind of IRL event, and then for reimbursement to be provided on a fixed, per diem and pro-rata basis to those who participate.

Lol yes, technically owned by the DAO. A crucial tool for Cody, WY.

It is only on monthly plans but it doesn’t work here in Ireland anyway so might make sense to post to someone who goes to events more frequently.

Sorry, I’m not sure what this means ?

The BMW i8 fiasco was nothing to do with me. The only money that was spent on the WY trip was on accommodation and group meals, of which I organised none except for a night myself and David were left stranded without accommodation due to the fact that events didn’t organise the Airbnb for the time specified.

The 4G hotspot was purchased due to the wifi in the Airbnb not being of sufficient speed or bandwidth for 10 people to use (30+ seconds to load an email). Was 100% worth it and used all of the time. I brought it down to Miami but most places had wifi so was rarely used.

Agreed this should be the approach. I believe the lack of awareness comes from inefficient communication throughout the DAO, especially out to Citizens.