With a number of impending land projects on the horizon, CityDAO has a big opportunity to test and scale interesting experiments with tokenizing IRL assets and experiences.

This proposal requests funds to test and build a system to record visits on Parcel 0. This would be an experimental project that aims to allow Citizens to mint an NFT that records a physical visit on Parcel 0, for now called a “Land Stamp”. While Parcel 0 sees very little activity, it’s an excellent (and our only) piece of land at the moment to develop and stress test a small-scale project like this, with the hopes that this can be scaled and adapted to other properties/locations quickly in the future. 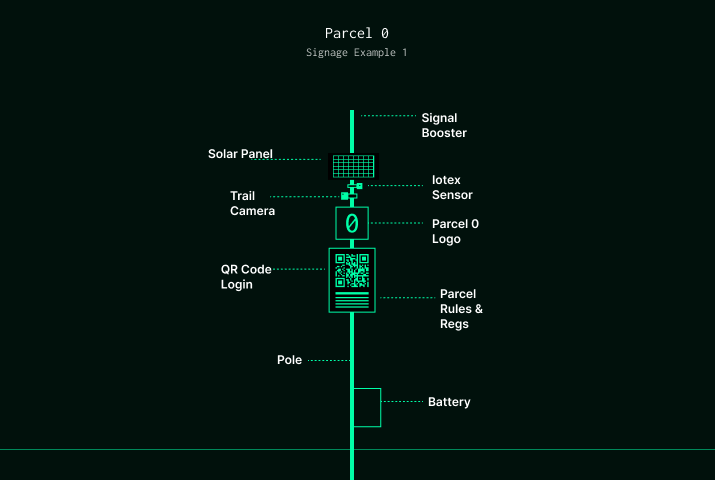 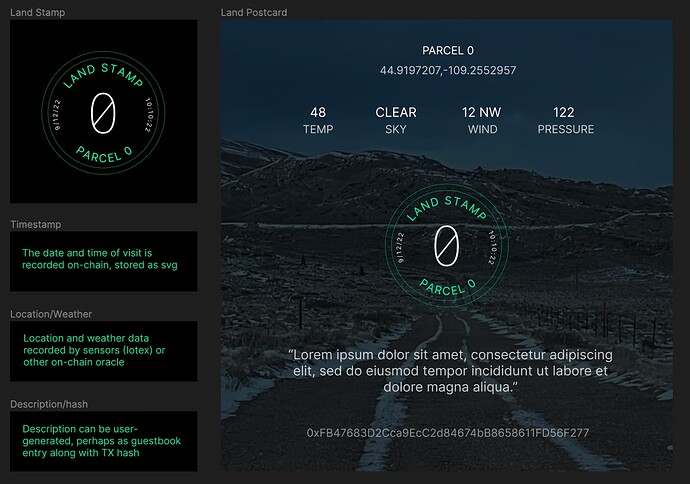 Excellent idea, only thing missing is some infrastructure on the property so that there is a reason for people to visit. Whether thats trails, a playground or a communal structure.

. It goes from the entrance (The Degentrance) all the way to the top of Moon Mountain. Would love to extend the functionality of getting a stamp beyond the entrance so someone could complete the trail along waypoints that get scanned (via qr) as well.

I’d like to support this but would request that you first decide on the rest of the team.

Casey presented this at last weeks Dev sync and it’s a great idea. Full support from me.

I agree its a cool idea, the key on discourse for CityDAO current governance is that you have to give the main proposal above a “like” if you want it to proceed! We need 20 to get it to Snapshot.

And agreed with above comment that we should spell out the team - otherwise nice idea @Casey!

Of course, should have confirmed team before posting this in retrospect. Reasoning for leaving it tbd is I think there are likely going to be many hands on this project, almost more in line with a hackathon, since a lot of this will be new territory from a tech perspective. That said, I’ve somehow convinced two brave Citizens to help me lead this effort.

On the install side, @2Jamez will be helping on the ground in Wyoming. He is an early Citydao contributor, having worked on the first sensors project, the city council and other parcel 0 efforts.

@slyRacoon23 will take on the development effort. He’s been a key member of the dev guild and worked on Parcel 0 reveal/mint.

I envision both roles will lean more into project management and there should be a fair amount of work delegated through citizen bounties and outside contractors.

I didn’t see it explicitly mentioned, but is the thought that this could be a vehicle/mechanism for how Citizen Time is tracked across all parcels? As that is one of the new key metrics used for project assessment (from what I understand), something like this system would be needed… Casey, do you have any other ideas for what the Land Stamps could be used for? Like a certain # of Land Stamps unlocks a perk… Just trying to think of the bigger picture and how this could fit in with the barebones infrastructure that would start to be built out. Basically, I think we should cram as much technology on that pole as possible – as you’ve pretty much shown here, haha.

Yes! I think that’s exactly the idea here. We should be building tools that help Citizens capture as much data as possible about their contribution/role in CityDAO, the network city etc.

I think the core idea behind tracking “Citizen Time” is just being able to efficiently allocate resources to where the Citizens spend most of their time. Land Stamps (tokenization of location) is the first step to figuring that out in a way that’s gives Citizens ownership of that data while opening up the door to applications/new primatives to be built on top.

You had me at new primitives!

I wonder if they aren’t a citizen if we could request a small payment in eth to use the facility. Like $5 or $25 for the month pass and we mint a temporary NFT.
Would be cool to expiriment with the new self destructing/rental NFTs.

Or like maybe even just an ‘honor box’ where people can put in eth who aren’t citizens.

NFT Time Capsule. You send your nfts (all the dead ones ofc) and then it returns them all to same address on some specific data 100 years from now.

Is there a map of the Tendie Trail? And/or gis / shape files somewhere here?

The “Degentrance”. How did I not see that before? The idea of having a free standing, solar powered pole with a QR code that can be used with an oracle to time stamp an NFT seems like a useful piece of tech, though right now the use case seems fairly narrow. I wonder how the tech could be expanded to using all kinds of spaces and not just entering land. Anyway, it’s a cool idea.

@DenverCitizen9 might be able to share that. Should be something we incorporate into this map: https://parcel-0.citydao.io/. if you follow the trail at the end of the road to the top of the mountain (Moon), that’s Tendie Trail 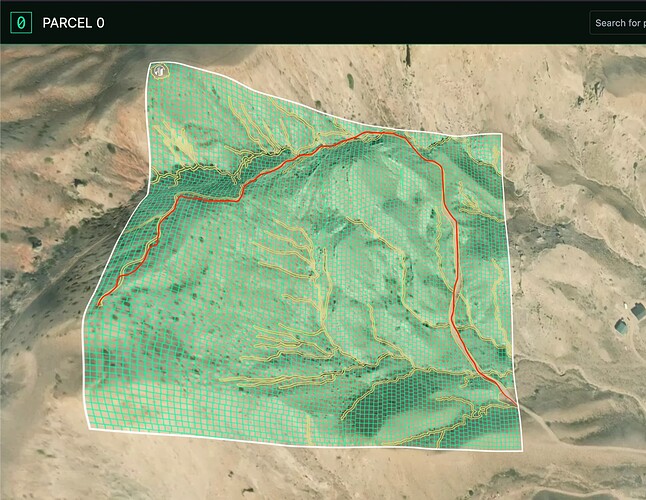 Yeah for sure, I think the idea here is to come up with something that be built by anyone with stuff from local hardware/sporting goods store. Parcel 0 is probably the harshest place to test this, but Denver (daolabs) and Blanca (bb parcel) will both be fertile testing grounds as well!

Yeah, POAP is probably a good place to start. Would be ideal to mint on our own contract but for this version may not matter as much.

This mapping overlay is incredible. Mind sharing how you made it?

Have you played with Uber’s Hexagon nebula.gl?

My only concern is that it’s another project that doesn’t have a clear methodology of helping replenish the treasury.

I’m starting to wonder if there should be some sort of requirement/standard set for the next batch of CityDAO projects to be focused on direct or indirect treasury replenishment.

The first project to put one single dollar back into the treasury is gonna be a pioneer.