After listening to and reading so many interesting ideas, I’ve consolidated a few that I find important, in this CIP: our DAO’s voting principles .

Our recent debates on the subject reminded me of Hofstede’s Power Distance Index theory (PDI): "the degree to which the less powerful members of a society accept and expect that power is distributed unequally. The fundamental issue here is how a society handles inequalities among people."

This brings me to my point: voting paradigm .

Personally, I support the notion of 1 person, 1 vote, because I hope that this DAO will keep its core community and initial direction and that the PDI between us will remain manageable.
As Vitalik describes CityDAO in his blog: "…plan is to start with this plot of land, and then add other plots of land in the future, to build cities, governed by a DAO and making heavy use of [radical economic ideas like Harberger taxes to allocate the land, make collective decisions and manage resources. Their DAO is one of the progressive few that is avoiding coin voting governance; instead, the governance is a voting scheme based on “citizen” NFTs, and ideas have been floated to further limit votes to one-per-person by using proof-of-humanity verification. Vitalik’s Blog Article referring to City DAO:
It seems this is one of our USPs in his optics.

Atst, I also, fully agree with the idea that we all vote equally, but we do not all execute equally. I think there are many ways to reward loyalty and community contributors, including asking citizens to vote for creating a yearly payment fund and plan for selected candidates (based on a voted reputation metric) aso.
It doesn’t need to automatically translate into more decision making power. With the passage of time such a difference could lead to an exclusive society, where new people will find it problematic to integrate or feel their voice is heard.

If we go for voting power based on number of NFTs or personal reputation or any other unequally distributed voting power, we might encourage the formation of power groups, which could jeopardize the long-term unity of the DAO.
Also, if we think about implementing this irl at some point and partnering with a community/city - I am not sure people are actually ready to accept their vote is worth less then their neighbors, as this is long ingrained in our structure.

The criticism to POH (not discussing technical issues) is that some votes could be “qualitatively weaker than others”, based on voter’s expertise in the field. Even if this might be the case, it can be counter-argued that it is less prone to corruption for more voters to take part in the process, as opposed to concentrating voting power in the hands of a few. Expertise and corruption are not mutually exclusive.
It is more complex and takes more effort, but it is objectively more preferable to try and win people’s votes, through agreed, transparent processes (town-halls, community calls), than to risk some form of closed doors, consolidated corruption at the top.
It is also true that the POH model generates a paradox: the more liquid , hence successful, our NFT becomes, the more unstable our DAO culture becomes, because of members changing often. I think a CityDAO should maintain a majority core community which ensures consistency in decision making and governance model over a defined time period. (whatever that will be). In the end, irl we also do not see our neighbors and communities rotating every day, in significant numbers.

One could also argue that if citizens have different marginal costs (or a different added value) for the DAO, the quadratic voting would be a better approach. But to solve also this dilemma, we could simply adopt Vitalik’s and Will’s ideas of a Harberger tax model to adjust to such variations.

Maybe two of the most important questions to initially vote on (and test its power), before drafting any detailed road-maps are:

In layman terms: what is our immediate purpose as CityDAO?

And I am not saying that they are imminently MECE. One could do both, but they imply different resources and road-maps and for the latter we actually need to start testing small scale. Otherwise it is simply a white paper. #1 could provide the funds to develop #2.
I think everyone in the DAO world is watching CityDAO and is waiting for that major milestone to happen: a real life DAO community fully on blockchain.
We should think what type of society we would like to emulate, while trying to achieve this: an “equal protection” type or one with a “ranked participation”. And for this we need to vote

Please comment, criticize, add.
(Sorry for any mistakes, but English is not my native language. )

Interesting points. I am not very familiar with each voting system described above but I feel more inclined towards a system based on the number of unique owners rather the number of nfts owned.

Thanks @ankle_sprain and a very good question! You should also mention it on Discord in the right channels for more visibility. This has a direct impact on the whole governing structure.
The way I see it, if the Citizenship NFT grants only voting and acquisition rights, the land should be owned through a different NFT or instrument, especially if the land will start to generate profits. I am nowhere near to being an expert on this, but I think it is a good topic for drafting a constitution article.

the notion of 1 person, 1 vote

what do we mean by this? is this described somewhere in concrete terms?

Thank you for the feed-back. This is a bit of a pleonasm from my side. I guess I wanted to emphasize the fact that the second option is about building a small community governed by DAO IRL and adapt it for large scale implementation (e.g. a partnership with a large existing city). This would mean using Treasury funds to build a settlement and test how this can function as a DAO (which by definition is a blockchain orga).

great read, thanks for putting this together. my main feedback would be: what are you actually proposing?

are you proposing we implement Proof of Humanity now? i think that’s a decent idea, but somewhat high overhead. a great start in my opinion is something like, one wallet one vote to start off with and gradually move towards PoH.

Thank you @scottfits. These questions also help me to refine my thoughts

My pitch is indeed for a long term POH solution. In the kialo working page (1 Citizen 1 Vote (Proof of Humanity) | Kialo) someone suggested the following approach for POH: “this would be easy to pull off w Discord gated channel and poll”. I am nowhere close to understanding the full technical implications of that statement (risks vs. benefits), but I fully agree with your point of being frugal for now and growing to more complex setups as we move further. But of course this is only my opinion.
@will greatly supported to set these 3 option on kialo and I think the first decision we should discuss (and maybe vote on): is which one of the 3 proposed voting scenarios should we implement and communicate as our philosophy:
1 NFT = 1 vote,
1 natural person (for now 1 wallet as it is easy to track even via Open Sea etc.) = 1 vote or we go for quadratic voting which fundamentally is not very different from option 1.

Looking forward to your feed-back.

Glad that you’re finding the Kialo useful. It would be great if we can get more activity on it to fully flesh out the pros and cons of each system (and perhaps explore other systems besides the 3). I do not want to form an opinion until such time as I consider all of the pros and cons to have been articulated and discussed, and thus am abstaining comment on your proposal.

@will I understand and I agree with your proposal that we need more inputs. I was also able to read your CIP-16. Amazing research. I think this is exactly what our mission should be: to make a gap analysis and come up with the best setup for a DAO to operate assets IRL. (in the end this is why it is called REAL estate). And if we realize things cannot be implemented in their current form, we should try to change the status quo and raise enough voices in the Web3.0 arena to back our DAO up.

Thanks for the interesting discussion, but this doesn’t seem like an actual proposal? Maybe rename the title to ‘Voting ideas’ or similar.

@tyro.eth you are absolutely right - the “dialectics of ideas” part tried to do just that. I could change it to only “ideas” or something similar, for more clarity, if that helps. Thank you for your feed-back

There is also somewhat of a proposal on the general voting approach, which could later on be split into smaller WPs, namely to start from 1 person - 1 vote (POH) or as close as we can to this principle from our early voting stages.

To address the problem of inconsistency if Citizen NFTs become very liquid, could we not have a staking policy?

What if the longer you choose to stake your Citizen NFT for, you gain more voting power (even if slightly). I am all for equal power and would very much like to avoid concentrating it over time. But there is a balance given we would rather people who actually have long-term commitment to the project having the influence. Anyone is free to decide to stake their NFT for say, 2 years, so it doesn’t risk a lack of fairness. The more you are willing to commit to the project, the more you get a say in the direction.

Also, perhaps a Citizen NFT must be staked for at least one month before voting is allowed? To prevent attacks and/or chaos with high turnover.

Thank you for the great ideas! I really like your approach with staking or anything similar to manage high citizenship rotation. The most recent approach proposed is a hybrid of POH and quadratic voting and this could integrate very well with that. I am all in for starting from on idea and perfecting it until it works optimally. I Let’s keep this going!

Thanks for your thoughts. Just want to share with you (just in case you don’t know) someone has created the same topic using Kialo. Have a look, you can leave your comments (pros/cons) as well.

Or You can leverage the tool for this Thread.

Thanks. Kialo was set up after this post and I voted there already. it is in the previous comments. 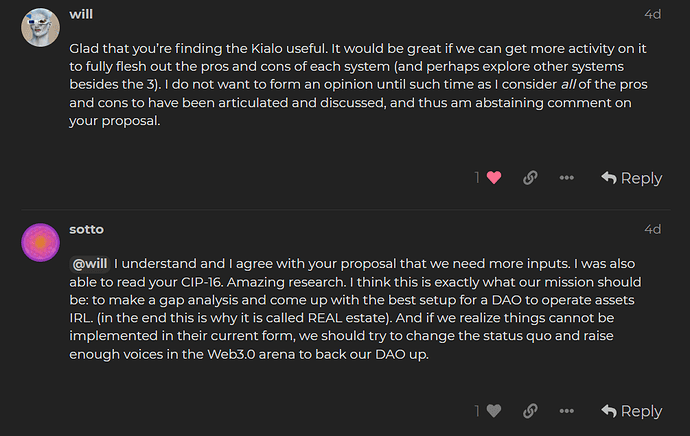 Sorry. I didn’t notice that. Can you attach the link to your first post? then everyone can see and leave their comments. I think we need more feedbacks.

Thank you and no worries. Many topics and a lot of comments already :). The first post in here is the one, if this is what you mean. Anyone can freely share it. I fully agree that we need more inputs and maybe a vote on the vote topic

I think it’s skipped a step.
Now let’s see how to get more than half of the votes.

I think it will not reach the 50 percent target.

Trial and error is the way to continuous improvement

Reality and feed-back will trigger next decisions and votes.

I always try to remember this is less than 6 months old. Imagine 2 years down the line.

we could combine PoH with liquid democracy (another project of the same folks who made PoH) - where citizens have the option to delegate their voting power to trusted leaders/influencers in the community. You could separate your delegation to different people on different topics (say for instance, I thought Chance has the best legal ideas, but Scott has better ideas on land management, i could delegate my votes on the different topics to the different others).